There are naturally two adrenal glands situated at the top of each kidney. Adrenal glands secrete hormones that are essential to life and these are cortisol, adrenalin, noradrenaline and aldosterone. Cortisol is very essential for the metabolism and balance of blood glucose. It is also necessary for regulation of the blood pressure and plays a major role in a variety of metabolic activities that involve the cardiovascular and the central nervous systems.

Diseases that affect the adrenal gland that need surgery are usually tumours that can arise from the normal adrenal gland tissue. A variety of tumours can arise in the adrenal gland . The most common one is the tumour that secretes aldosterone. These are a benign tumour, they could be multiple and they could be bilateral but most often they are a single tumour that leads to elevation of the blood pressure which tends to be resistant to treatment in addition to a low level of potassium in the blood. Certain blood tests are usually enough to pick up the diagnosis and that will be followed by localisation studies which involve a scan. Usually in the form of a CT scan or a MRI to find the adenoma. These tumours tend to be small and they can be less than one centimetre which make the localisation of the tumour particularly hard as to whether it is the left or the right side that is effected. In that situation usually your Doctor will recommend localisation studies which involve an invasive angiographic sampling of blood from the main vessels to locate the lesion. 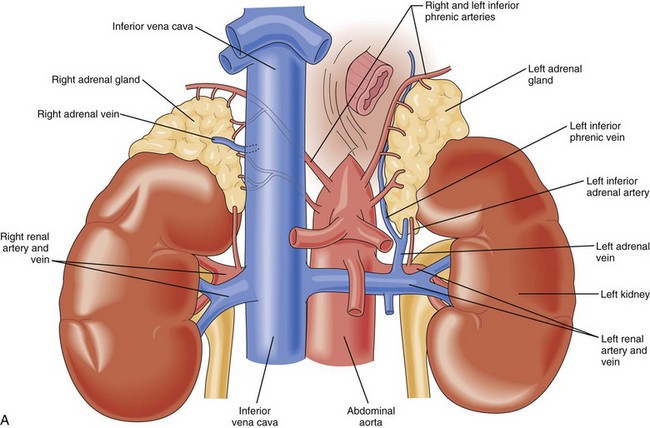 Adrenal adenomas or benign adrenal tumours are often discovered incidentally. Occasionally when you get a scan for another reason the CT scan might show an incidental finding of a small lesion in one of the adrenal glands, most of these lesions are benign and nonfunctioning lesions. They do not secrete hormones and they do not progress to malignancy. There is a big association between the size of the lesion and its malignant potential. When the patient is found to have an incidental adrenal adenoma,  your Doctor will request serial images in the form of CT scans or MRI’s to ensure that the lesion remains stable and does not increase in size. Size is associated with a malignant potential and the cut off is slightly arbitrary and that will be between four to five centimetres. Lesions that are approaching five centimetres need to be removed because the chance of having cancer in these lesions at that level is about 20% and it increases with the size. Adrenal adenocarcinoma is pretty rare but it is quite an aggressive disease if it happens. That is why if a lesion appears on the adrenal it will have to be followed up to ensure stability or if the lesion progresses it will need to be removed by surgery.

Another tumour that appears in the adrenal gland is called a pheochromocytoma. This lesion produces adrenalin and on occasion noradrenalin and leads to a severe form of high blood pressure that needs several medications to control it. Often it can lead to attacks of anxiety associated with palpitations, sweating and fatigue. The clinical situation can be confusing initially and the patient can be diagnosed with anxiety until the condition is investigated for a presence of pheochromocytoma. Some of these lesions are bilateral and some of them are multiple and they can happen elsewhere apart from the adrenal gland in only 10% of the situations. These tumours are benign but some of them have malignant potential and they can metastasise. The diagnosis is confirmed by doing blood samples and a urine sample. A blood sample to check what is called serum metanephrine and a urine sample to check the 24 hours metabolites of catecholamines which are the adrenalin, the noradrenaline and the dopamine. Once diagnosis is picked, then a CT scan or MRI will be requested to see the lesion and usually the lesion is big enough to be seen on scanning without the need for localising studies. Surgery is the only curative treatment but blood pressure needs to be controlled really well prior to surgery and a lot of intravenous fluid might be needed. The excessive hypertension will put a lot of strain on the heart and it can lead to cardiac failure. The preoperative period can be associated with complications more so than other types of adrenal tumours.

The adrenal glands are tucked in the retroperitoneum just above the upper pole of the kidney and historically the operation that is required to remove the adrenal gland meant a large incision in the left or right subcostal region to be able to access the gland. However, the event of laparoscopic surgery has made adrenal surgery routine and less complicated. A laparoscopic operation is usually used to remove the adrenal gland. Since we have two glands removal of one of them is feasible because the second gland will compensate for hormonal production to maintain life. The operation is done under general anaesthesia and the patient will be put in a lateral position. A camera will be introduced inside the peritoneal cavity and the adrenal vessels are usually identified and controlled and then the adrenal gland is removed and sent for pathology. You will find that your surgeon might leave a drain in overnight to ensure there is no bleeding. The patient will stay overnight in the hospital and the next day they will be able to go home without specific restrictions apart from their medical treatment. The complication that can arise is difficulty in the laparoscopic approach where you might need to have an open approach for the operation for removal of the gland. Bleeding is known to happen with any surgery and the adrenal gland is associated with a few major blood vessels anatomically so the risk of bleeding is always there. Usually that happens either at the time of surgery or in the first few hours following the operation where the patient might need to go back to the operating theatre for a further procedure.